Australia hosts a large number of unique birds and animals.  More than 80% of
their plants, mammals, reptiles and frogs are found only in Australia. Included
in these numbers are the kangaroo, koala, echidna, dingo, platypus, wallaby,
wombat, quolls, bilby and emu.  One of these amazing animal groups
are the monotremes, or egg-laying mammals such as the duck-billed platypus.
More than half of their 823 bird species are also only found there.

-  Great Barrier Reef, or the "Reef ", when referred to by Aussies, is the only living
animal visible from space.
-  The present reef system began growing on top of older reef formations about
8,000 years ago, after the ice melted from the recent ice age.  Original reef
systems started developing about 18,000,000 years ago, but as ice formed during
successive ice ages, the oceans would drop and reef growth would be terminated.
During the last ice age, our oceans were about 400 feet lower than today.
-  Covers 344,000 sq. km. or 132,000 sq. miles.
-  Size of Italy or 70,000,000 football fields.
-  500,000,000 people depend on reefs worldwide, for their livelihood.
-  Algae provide 90% of the nourishment for coral, as they recycle nutrients generates
by the coral.
-  Crown of Thorns starfish is currently causing significant damage to the reef.
-  About 10 cyclones have hit the reef in the past 13 years  causing significant damage,
which is more than occurred over the previous 100 years.  Cyclone induced reef
damage routinely takes up to 10 years to recover.
-  About 50% of the reef has been lost since 1982, however Tyrone is optimistic
that this process can be stabilized or reversed.
-  Significant initiatives are underway, such as artificially seeding the area with reef
larvae,  rebuilding habitat for marine life, preventing chemical contamination from
agriculture and industry, killing the Crown of Thorns starfish, transplanting coral
from higher temperature waters in the North as the oceans warm...…

10:00 PM Update:  Dr. Tyrone accepted our dinner invitation with David, Younga, Merrilynne and I tonight, in the grand dining room.  Very cool to discuss the great barrier reef with the preeminent authority and administrative coordinator of the Australian initiatives to remediate the "Reef"! 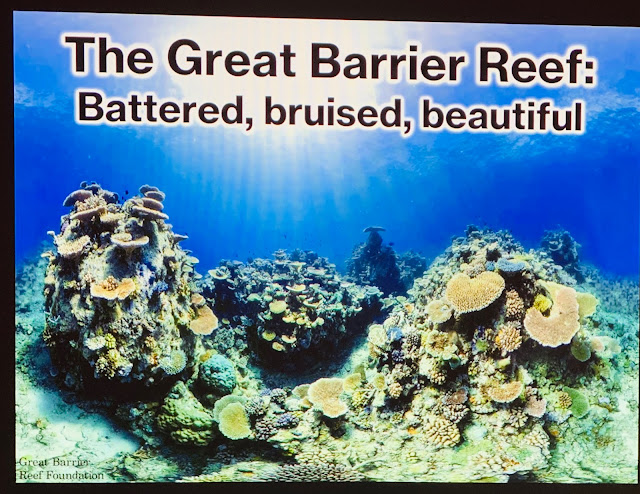