Irregular stuff includes cruising in the Gulf of Eden, along the Yemen coast, knowing that pirates are possibly operating in the area.  Excellent having navy seals, younger retired guys, visible around the ship with their communication devices in hand.

Scott (retired FBI), one of the Around the World passengers, was telling me that burned out army tanks are present on the Yemenis coast.  This country has been in various states of war for 100 years.

We passed through the 15 mile wide Bad-al-Manadab Strait mid-morning, exiting the Gulf of Eden, then entering the Red Sea.  On our starboard side was Yemen, Djibouti on our port side.  Djibouti has a population of 950,000, is small - 9,500 sq. miles, about the same size as New Jersey and is sandwiched between Somalia, Ethiopia and Eritrea.   As we progress up the 1,400 mile (2,240 km) Red Sea, Saudi Arabia will be on our starboard after Yemen, with Sudan, then Egypt on our port side.  We pass close to Mecca, but do not visit.  Everyone is experiencing various degrees of relief as we leave the dangerous areas in our wake!

One more sea day as our course takes us to Aqaba, located on the Northern tip of the Gulf of Aqaba, in Jordon. Plan to visit Petra and Wadi Rum.  I know, I was thinking - Rum in Jordan, but it is actually a spectacularly scenic area along the lines of the vistas in Utah and Arizona. 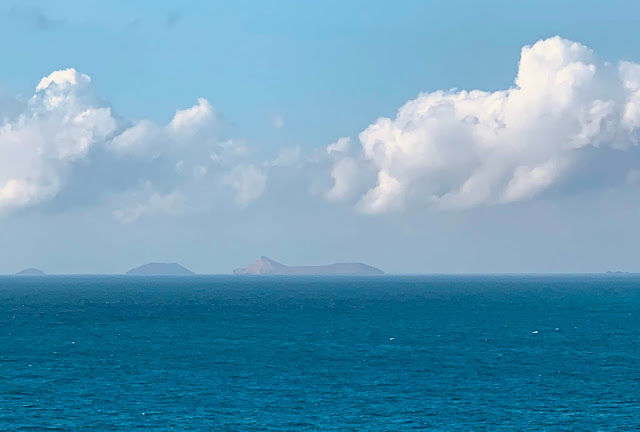 Yemen islands close to  East coast  - shot into the sun. 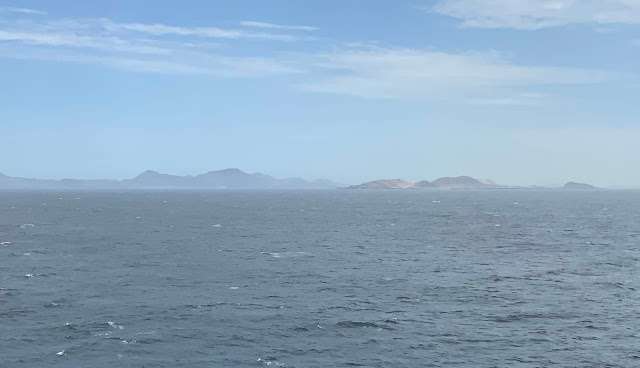 May 19:    Another bang up buffet today, for Sunday brunch 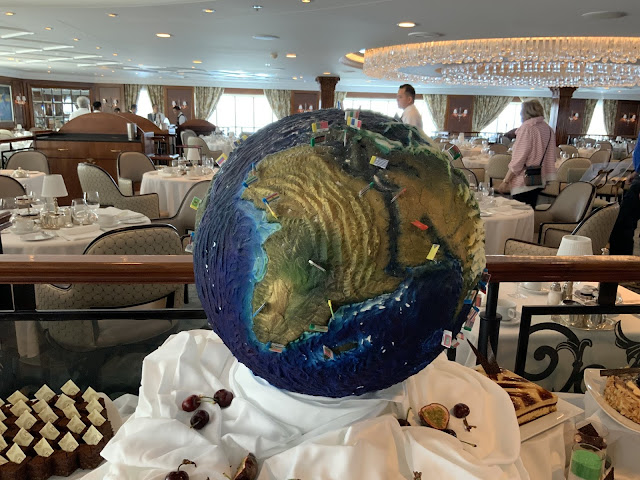 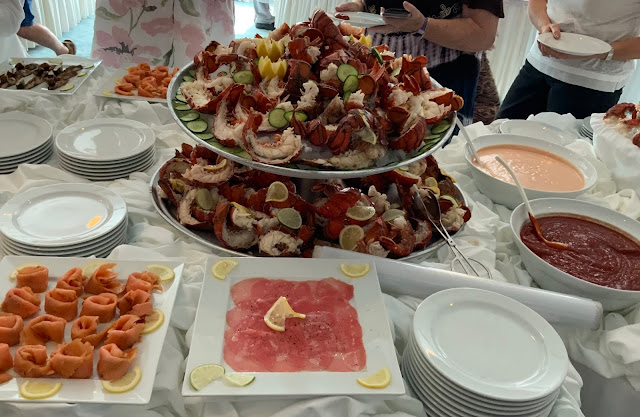 Marvin on the right, our favourite host, with team mates.  Marvin is a Honduran, and you will be interested to hear his take on the refugee caravans that came out of his country just before the 2016 mid-terms. 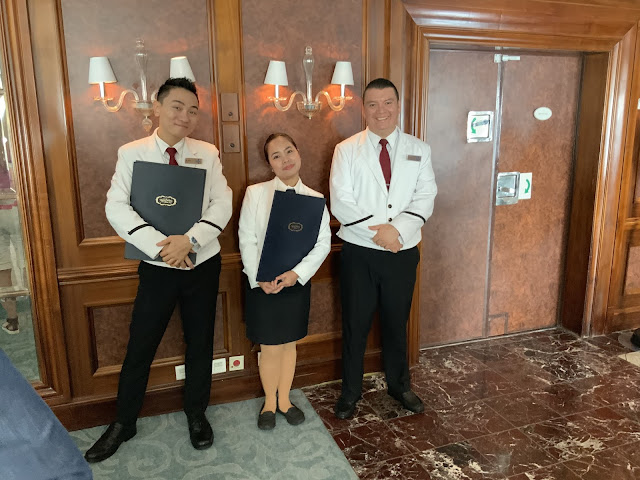 Adam Tanner presents another informative lecture, this time on the Suez Canal.  I have used some of his pictures here.

Canals through the area where the current Suez canal is located have been contemplated and even built for about 6,000 years, as ancient records document.  Persian King, Darius 1, engineered and built a functioning canal in 500 BC. Connecting the Nile to the Red Sea, it was operational during flood periods.  Around 250 BC, Ptolemy II rebuilt the Darius canal, primarily to transport battle elephants to Egypt for warfare.  Cleopatra is rumoured to have used here barge on it.

A direct canal connection between the Red Sea and Mediterranean was resisted because it was felt that the Red Sea level was much higher than the Mediterranean.   If in fact true, a catastrophe would have ensued.  Napoleon refrained from exploring a canal for the same reason, during his conquest of Egypt in 1798.  Turns out, of course, that the only issue is tidal differential.

French engineer Ferdinand de Lesseps promoted and was successful in getting international funding for the Suez project and construction commenced in 1859.  Egypt owned 44% of the project and supplied forced labour.  By 1863, dredges were introduced to the project after major human suffering and worker deaths.  First shipping occurred in 1869, with transit times to Europe being reduced from years to weeks for many routes.

Egypt's ownership in the project was short lived, as a bankrupt president sold their 44% share for 4 million pounds to the British in 1874.  Egypt became a British protectorate in 1914.

Significant unrest occurred over Britain's operation and ownership of the canal, so Britain withdrew its troops and administration in 1955, while retaining ownership of the canal. After a British refusal to fund the first Aswan Dam, in 1956, Nasser nationalized the Suez Canal. Britain, France and Israel responded by starting the 1956 war, without consulting with most nations, including the USA.  Ike was very upset as well as many other country leaders, so the aggressors left the canal zone to UN peace keepers.  Closure of the canal continued for 7 years.

Much of the canal has been twinned.  Global warming may seriously impact canal traffic as the Arctic Ocean becomes more navigable!

May 20, 2019       Sea Day       -     Explosion which injured 16 in Egypt yesterday has Merrilynne and I reconsidering our excursion to Luxor.  Having visited Egypt a few years ago on a 18 day tour, maybe best to forgo this time?  Decision time tomorrow. 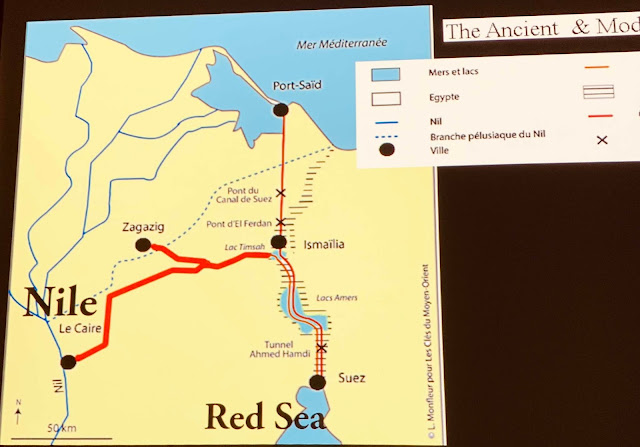 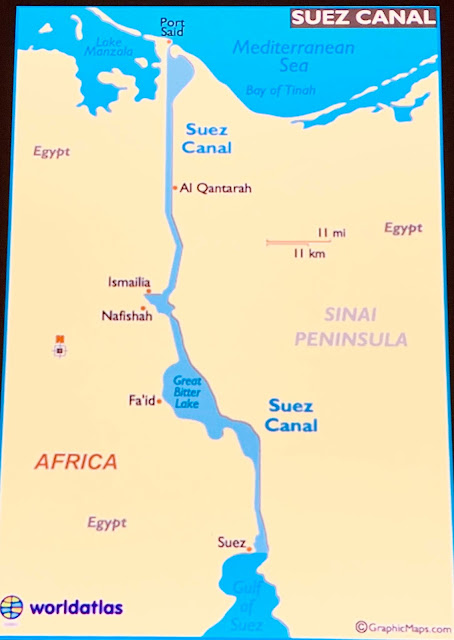 Oil shipment dominated tonnage through the canal, even as far back as 1935.  2019 will see shipments totalling1 billions tons.