The Port serving Piraeus, Greece is our destination for the day.  Athens is a few kilometers away, but our excursion today takes us 100 km to Delphi, to see the ruins of the Grand Temple of Apollo. This shrine was considered the spiritual and physical center of Earth for 1000 years, dating from 500 BC.  Fabulous statues and magnificent structures adorned the site which has been plundered by many invading countries over the centuries.  At least 300 metal statues were stolen along with immense riches, which now reside in Istanbul, America and many European countries. Some initiatives are underway to repatriate these treasures.

As we all know, Greece has a proud history of battling tyranny.  In 489 BC, 20,000 Persians attacked 10,000 Greeks in the Battle of Marathon, to be soundly defeated.  Persians lost 6,400 soldiers vs. 192 Greece fatalities. Remember Pheidippides who ran 26 miles to Athens to announce the win, only to drop dead immediately after. 10 years later, the Persians returned with an estimated 150,000 troops to seek revenge and conquer Greece.  Ultimately, a dramatically smaller Greek force prevailed, back stopped by the final fatal stand of 1,000 brave soldiers.  Many believe that the Western world would likely be Muslim if the Greeks had not sacrificed everything during that fateful week in 480 BC.

A visit to Greece must include acknowledgement of the roll placed by their citizens during WWII in shaping world history.  German forces faced severe resistance by the Greek Resistance which lasted for over 7 months in 1940 / 41. (Norway fell in 7 days and France fell in 3 days) Due to this delay, Hitler was delayed in attacking Russia, where the Germans were subsequently confronted by a terribly cold winter and ultimate defeat in Russia.  Historians suggest that the Germans may have defeated Russia had they arrived in the early summer, so once again Greece had a huge impact on world affairs.  One must remember that thousands of Greek civilians were slaughtered by the Nazis to avenge their resistance!  Germany has not responded to a request from the Hague to recognize these atrocities.  Photo of one memorial follows.

Greece language is the source of many western expressions. ie.  Idiot is the translation for a loner, a person who does not contribute to society.

Many local and global shipping companies are head-quartered in Piraeus.  One company operates 3,400 ships.

Our lunch was a Greek feast which never seemed to end.

Moored in the Port that serves Piraeus. 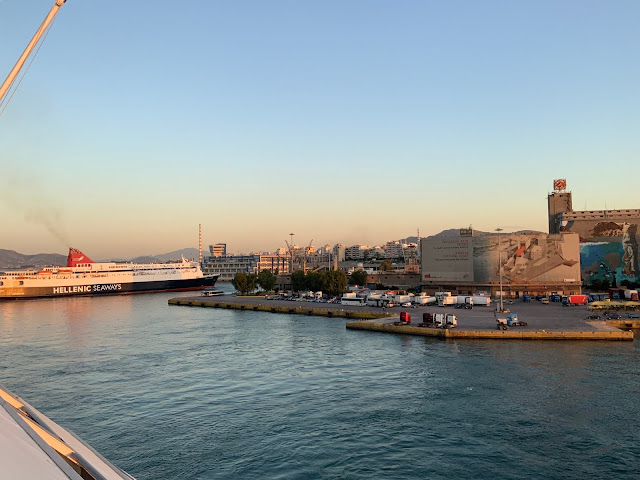 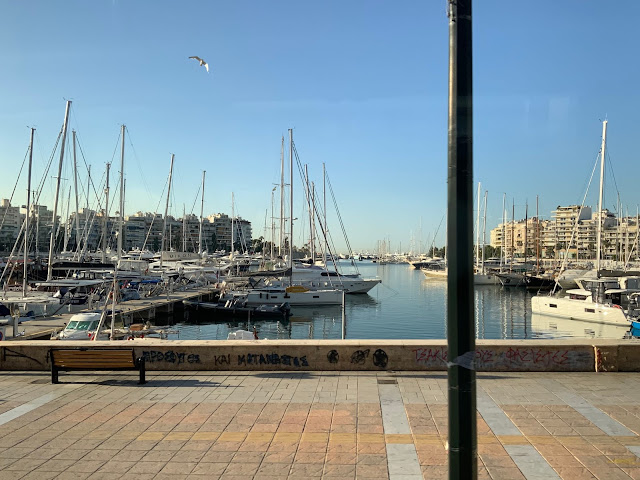 Scenes on our drive to Delphi 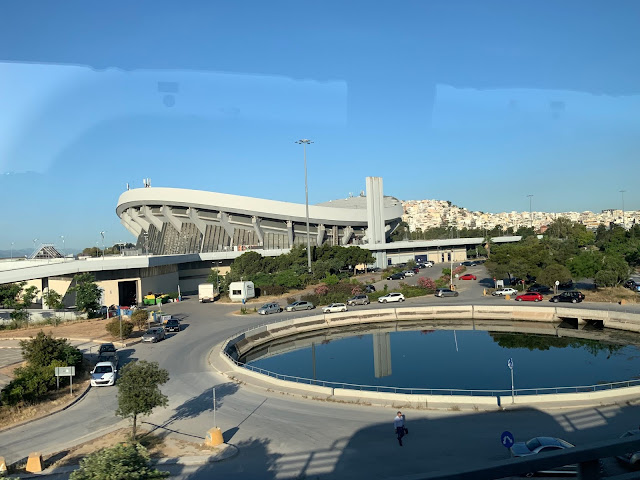 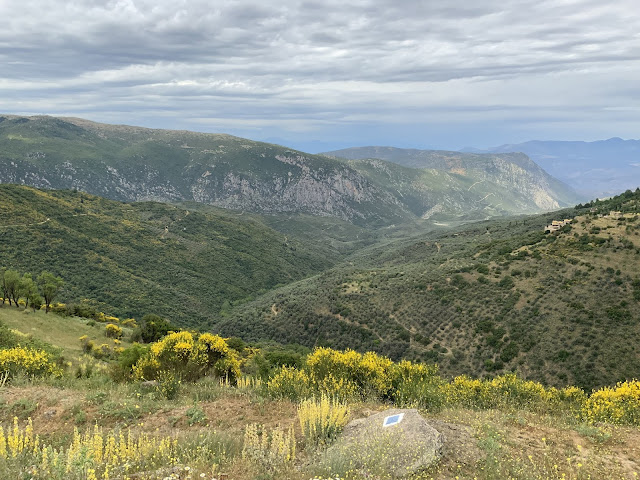 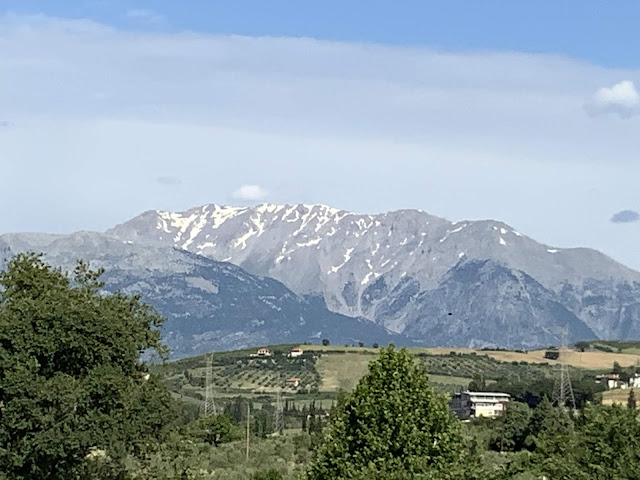 Memorial to citizens slaughtered by the Nazis - WWII 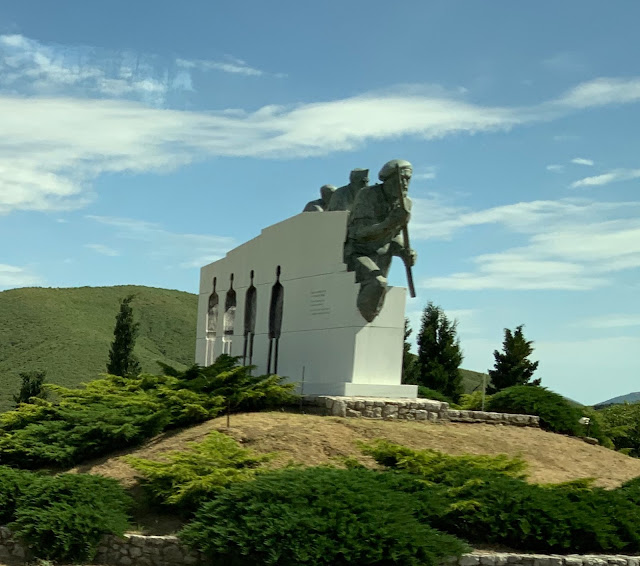 Much of mountainous Greece is similar to Switzerland 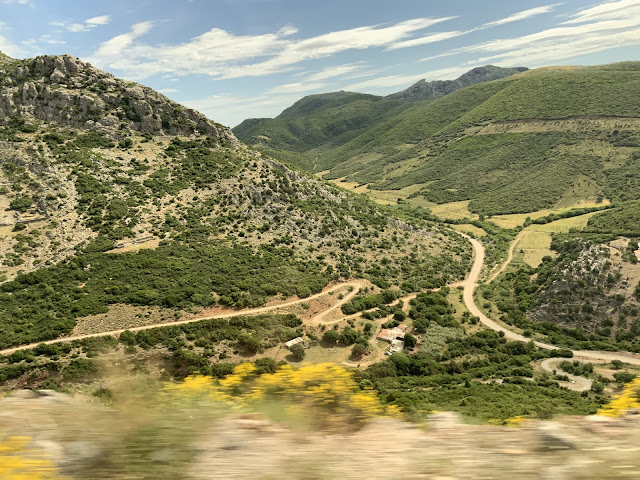 Town built far back in the mountains to avoid marauding pirates, invaders and for general security. 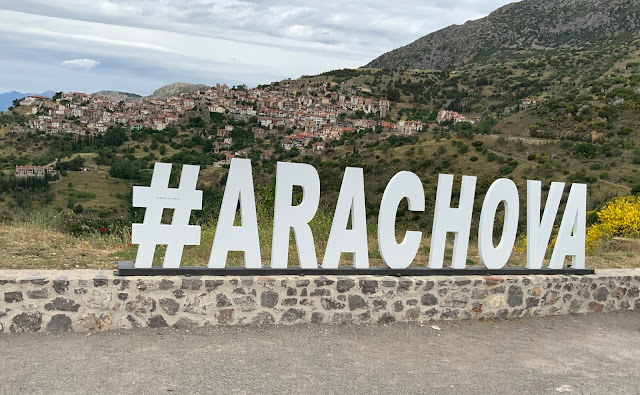 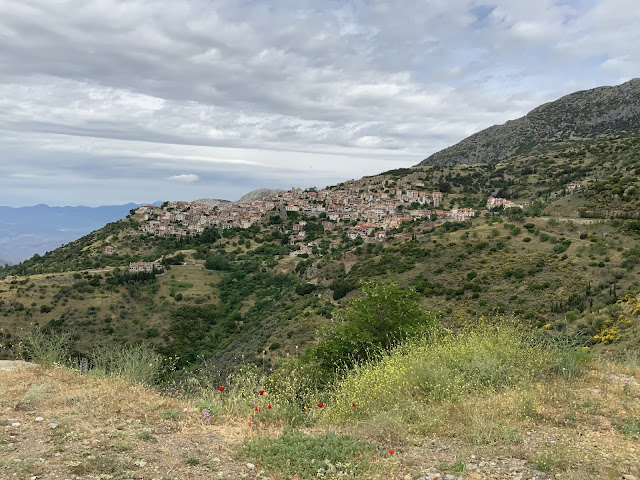 Well-built 500 year old town of Arachova.  Imagine climbing these stairs to get home! 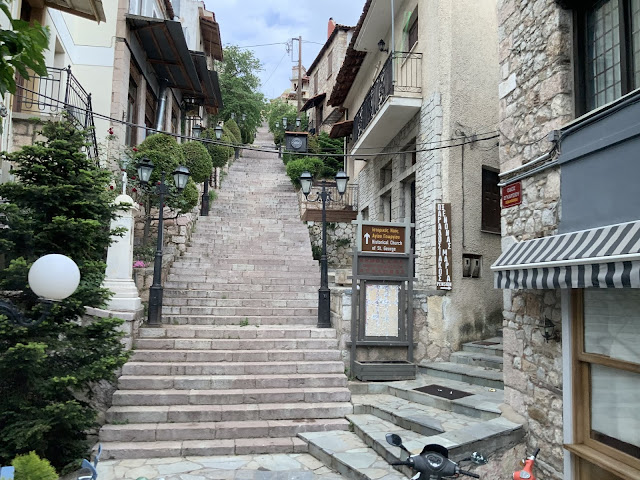 Graphic representation of the Apollo Shrine. 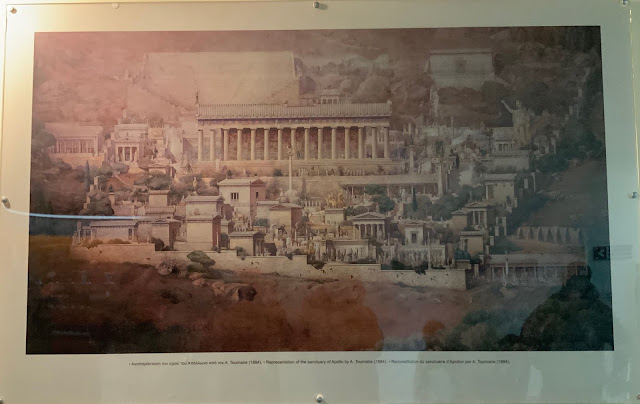 Ruins of the Shrine to Apollo 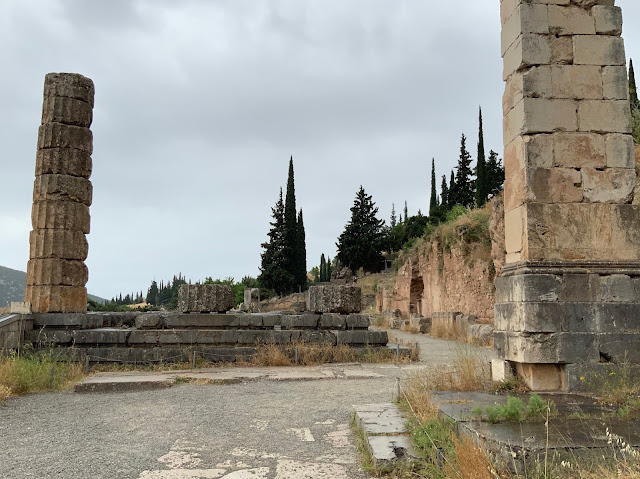 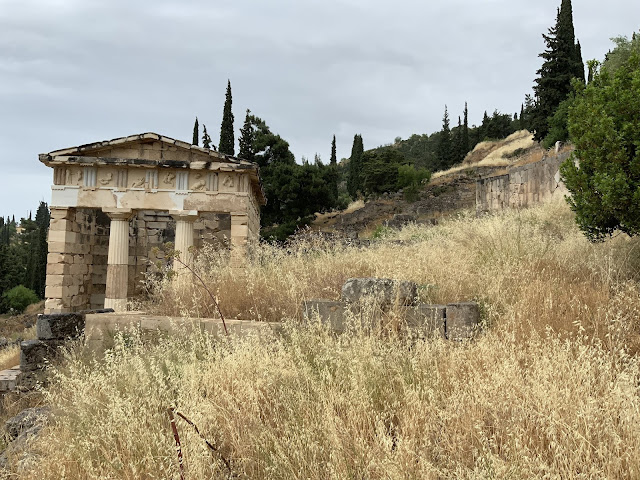 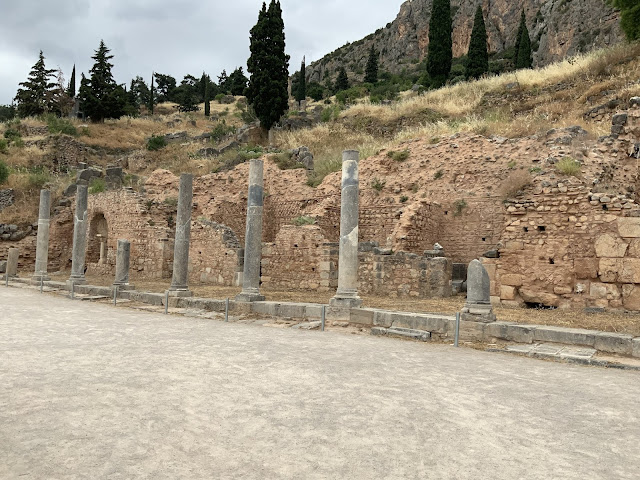 Remnants of a life-sized statue of a bull made from pure silver.  450 BC 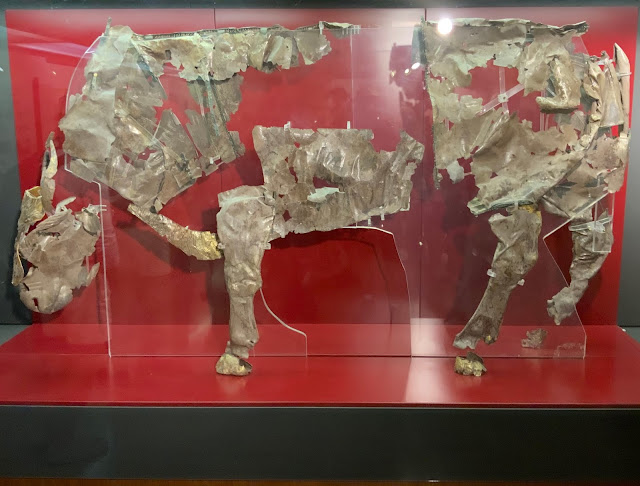 Gold riches from the shrine which were overlooked by plunderers. 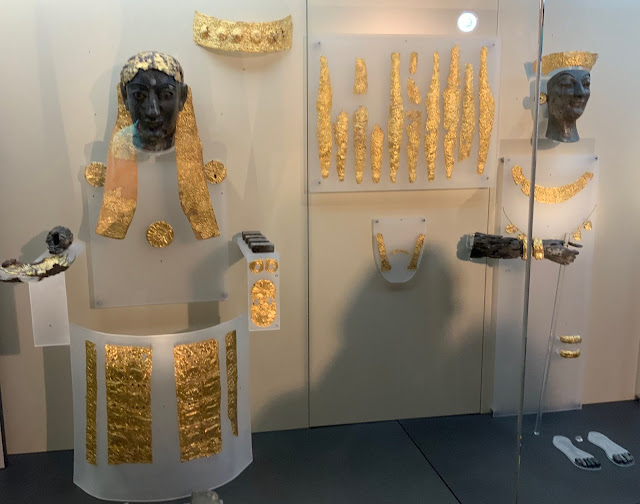 Hundreds of statues on display.  Thousands more of higher quality were stolen. 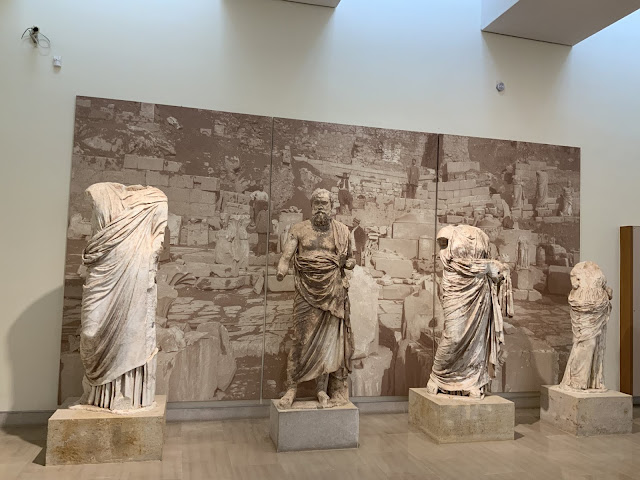 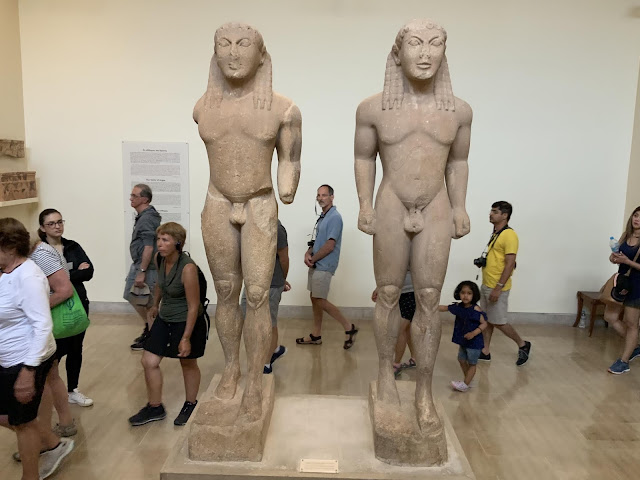 The end of a great day in Greece 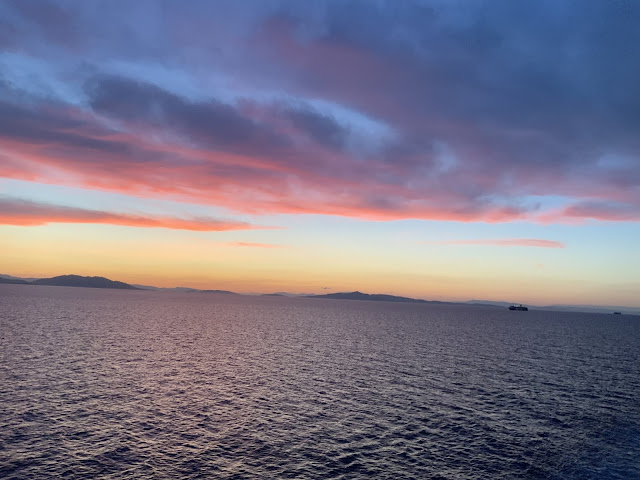