Adam Tanner's lecture on British involvement in India was informative while troubling! It seems that abuse of colonized countries by the colonialists was ubiquitous on all fronts, including religious, humanitarian and economically, with Britain's treatment of the Indians no exception over centuries.

The East India Co. was established to carry out trade of products like spices from India and other Eastern countries.  The East India Co. was the first company in the world to incorporate limited liability provisions to protect investors!    Britain maintained a 250,000 military force to control India for the East India Co. Their mandate evolved from an commercial focus to a combined economic / civilizing focus.  Yes, some practises were abhorrent, such as the burning alive of widows. Then again, some loyal women would burn alive themselves to avoid being enslaved by a conquering army.

In 1857, the Sepiod Mutiny erupted when the British introduced the 1853 Enfield rifle, using a new greased cartridge.  Rumours circulated that this was pig or cow grease which was very demeaning to both Hindus and Muslims.

Queen Elizabeth became the Empress of India in 1877, in a gesture to bind India closer to Britain, with tenants requiring that people should receive equal treatment.  This endeavour was overshadowed by a massive famine a year later with 4 million starvation deaths.

India was the backbone of the British military with their population of 250 million to draw troops from.

Quinine is an anti-malarial drug, a point not missed by industrious British soldiers, who developed Gin and Tonic  in 1815.  Thank you guys.  USA were involved in this development with their chief export to India being ice, for the drinks.

MAHATMA GANDHI - Leader of  movement against the British rule in India!

- Born in 1969, married at 13 to 14 year old Kasturba Gandhi, resulting with 4 children and a 62 year marriage.
- Gandhi wrote over 90 books, many advocating peaceful political change.
- Attended U. of London for law degree, 1888 to 1891
- Unsuccessful as a lawyer, becoming a political activist after a fateful train incident in South
Africa.  He had purchased a first class ticket but was forced to travel in third class, which he
refused so he was thrown off the train by police..
- Gandhi spent many years advocating for a peaceful transition to Indian independence.  When WW1 erupted, he supported Britain's drive to get Indian volunteer recruits, hoping it would influence Britain in the independence effort.  Britain did signal positively, but reneged on easing controls.
- India had sent 1 million troops to WW1, suffered 74,187 killed, as many wounded, with little recognition from Britain.  Furthermore, while Indian troops were fighting and dieing for the Empire, their families were being abused at home.
- April 13, 1919, after days of civilian unrest motivated by new repressive regulations,  civilians were fired upon by dozens of British troops, killing 379 and wounding 1137 men, women and children.  This massacre permanently damaged relationships with Britain.
- 1882 Britain enacted the Salt Act which made it illegal for Indians to process salt or to even pick it up from the sea!  Unbelievably, Indians had to pay a tax on all salt.  Then in 1930, the tax was dramatically increased, so Gandhi and supporters completed the 240 mile Salt March to the sea in March, 1930, where they processed some salt.  Gandhi was arrested and spent 10 months in jail, but his march motivated millions of Indians to follow suit with beatings, jailing and abuse taking place for over a year.
- Gandhi was arrested frequently over the years.  See Photo.
- Income disparity was massive - 8000 British administrators were paid 14 million pounds while 130,000 Indian administrators shared 3 million pounds annually. (1750 vs 24)
- On one visit to Britain during independence negotiations, Gandhi was asked what he  thought of Western civilization.  His answer was he thought it would be a good idea!
- India gained independence on August 15, 1947.
- Gandhi was assassinated six months later. 2 million attended his funeral.
- Lord Mountbatten was sent to India to wind down the colony and to facilitate India's independence.  The process was done in a hasty manner, with insufficient consultation and consideration for ethnic, religious and territorial history.
Gandhi was the most eligible Noble Peace Prize candidate of the 20th century, but he never received the award.

East India Co. set up to handle Commerce from Colonies. 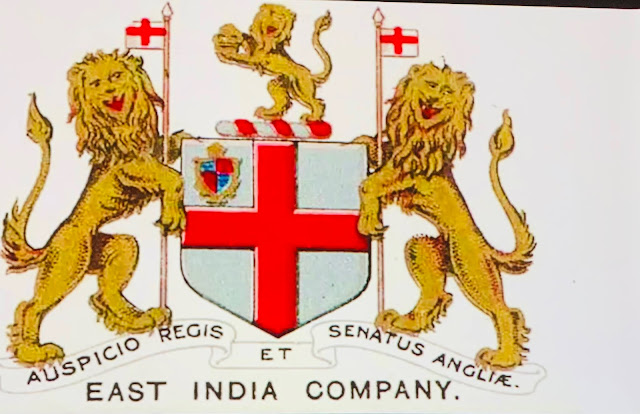 European countries controlled very little of the world's resources and populations in 1500. 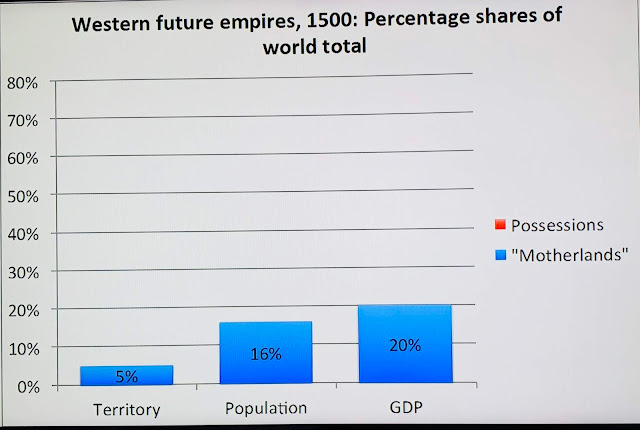 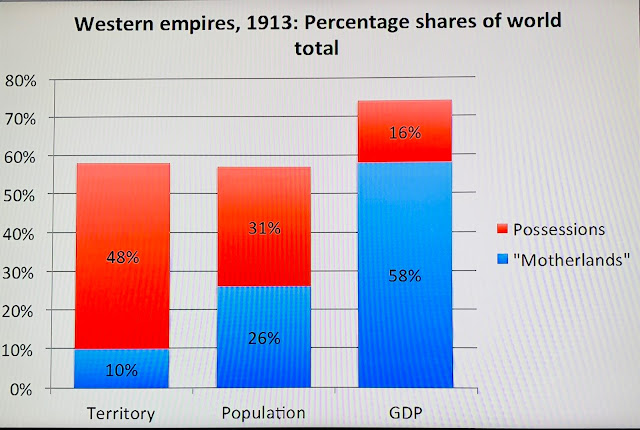 Huge markup on spices for traders.  Process of transferring wealth from East to West through trade.. 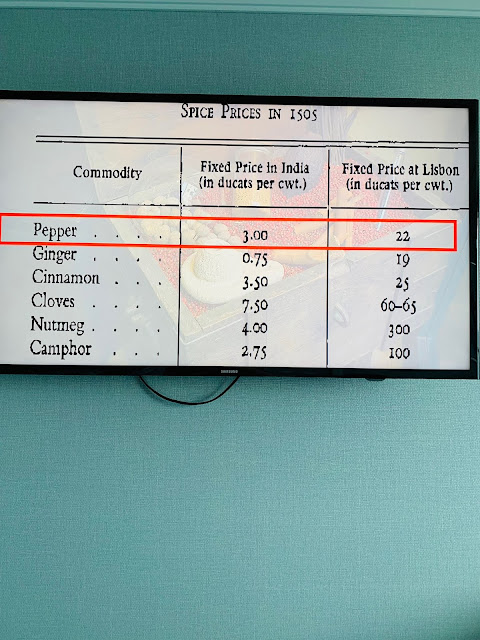 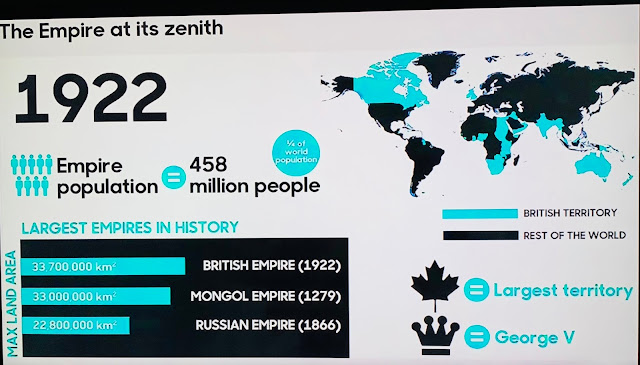 Powder packs assumed to be tainted with animal fat.  Stimulus for the Sepiod Mutiny!


Troops preparing to fire on men, women and children, 1919

Posting after the massacre 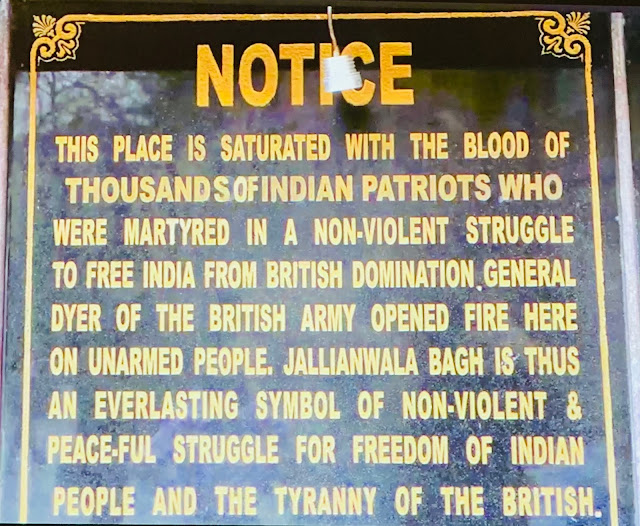 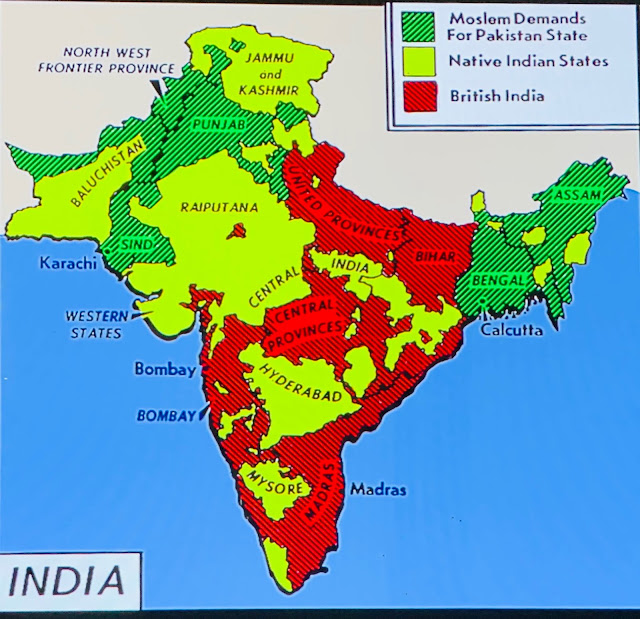 Even Churchill was negative toward Gandhi!.

On the lighter side, Lord Mountbatten's wife had an affair with Nehru.  Poetic justice? 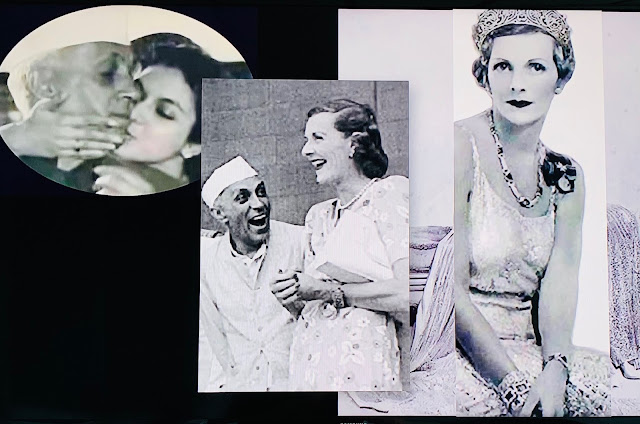 Letter to Hitler by Gandhi. 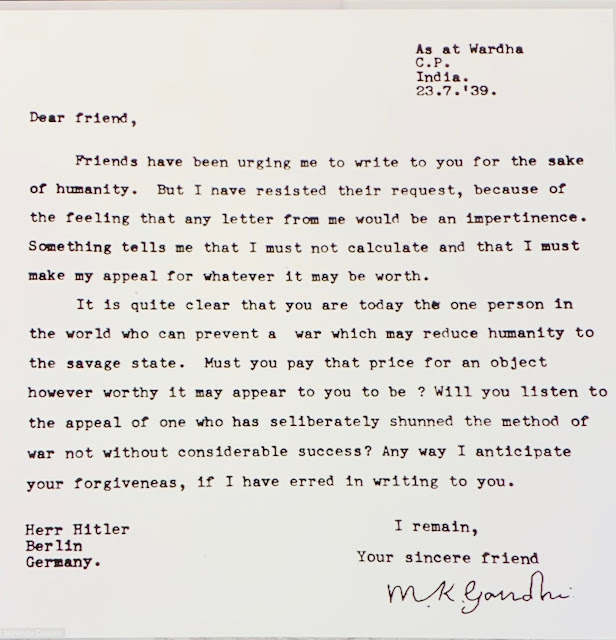 India was the richest country on earth for the first 1600 years after Christ.  Then as the European powers began making incursions into the Eastern countries, the economics rapidly turned to the benefit of the colonizers.

- 1 million residents died during unrest prompted by the partition of India to form East and West Pakistan and India.  Burma was separated from India during this process.
- Territory around Goa was colonized by Portuguese for 461 years,so they resisted Indian domination until 1961.
- 160 million Indians are former 'untouchables'.  Britain had enacted legislation before India's independence that actually decreed that the lowest caste members are criminals, automatically, when bore.  Seriously!!
- India passed laws in the 50's outlawing the caste system, but the stigma still lingers.
- India's economy continues to outstrip western economic performance as well as continuing improvement in social and humanitarian standards. Note captions on photos. 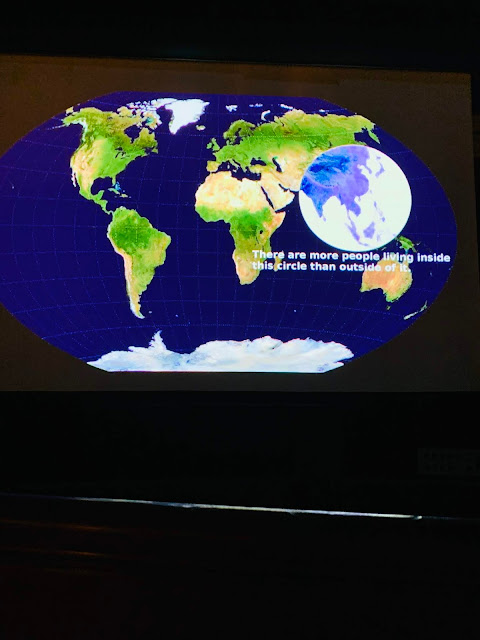 Couples are beginning to make personal choice on partners 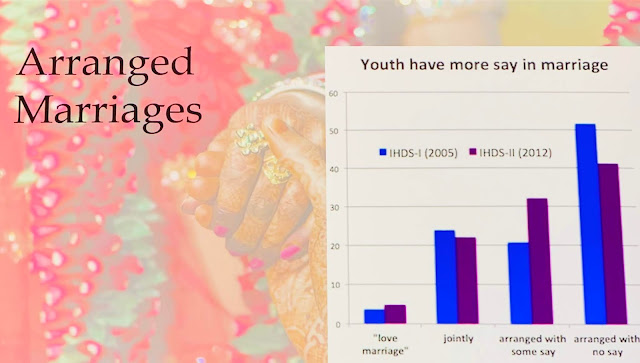 Projected economic growth of many countries for next 5 years. 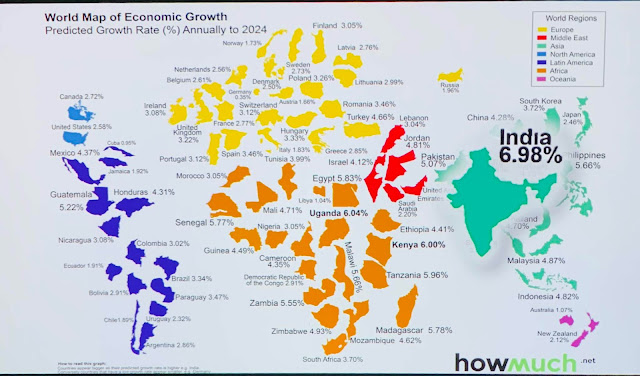 Indian population continues to grow with a higher birth rate.  China and western countries have a decreasing number of workers to support the aging population. 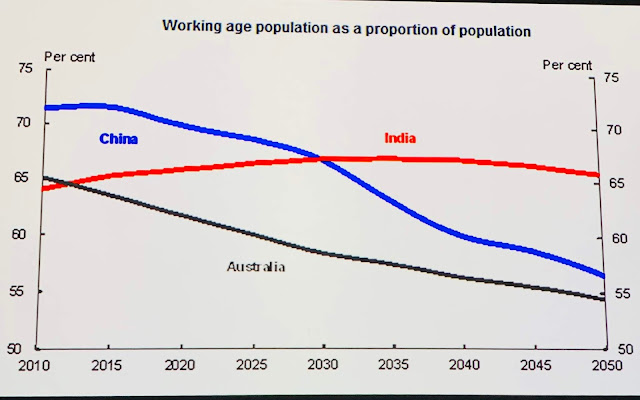 India's caste system, outlawed in 1950s, but is still embedded in their society.

USA dramatically behind economically within 10 years.  India GDP is 11.1% in chart.   Lets keep isolating ourselves and accelerate the decline! 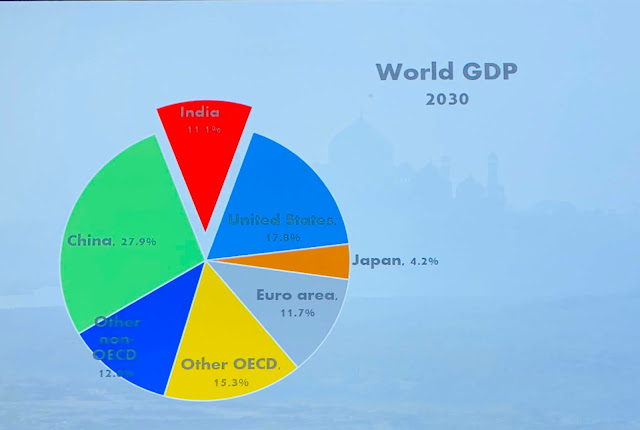 Within 30 years, the USA will be at risk of falling into fourth place, with OECD ( Organization for Economic Cooperation and Development, Countries like Canada, Australia, New Zealand, etc..) closing in economically.  Note the Euro zone is also slipping.  India's GDP in chart is 18.2% 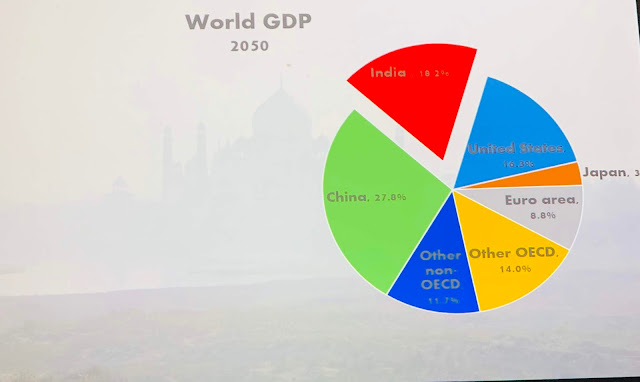