As a side lite, an interesting movie set for the TV series "Ninja Warrior" just happened to be situated adjacent to our dock. Filming was taking place each night.

Our schedule will be hectic for the next few days with excursions starting at 6:30 AM and tonight we will be back on board about 11:30 PM. Tomorrow, we have another 5:00 AM wake up.

Jews world wide had a standing invitation to move to Israel without restriction.  Israel is the only democracy in the entire region!

Comments on Israel:  (Very general information, only meant to provoke interest for further investigation if interested)

- Jews trying to reach Israel between late 1945 and their independence on May 14, 1948 faced terrible restrictions from Britain, with many ships being boarded, occupants beaten and ships sent back to Europe.  Hard to believe or understand.
- After a Treaty in late 1947 and further delays, Ben Gurion declared independence on May 14, 1948.  The next day, all the surrounding Arab states declared war on Israel and attacked the day old nation of 600,000 people, who were unprepared and ill equipped with weapons. Nine months later, the young nation emerged victorious.
- Unfortunately, conflict is never far from the scene in Israel: Suez war - 1956, 6 day war - 1967, Yon Kipper war - 1973, Lebanon - 1982, South Lebanon conflict - 1985 to 2000,  First Intifada - 1987 to 93, Second Intifada 2000 to 05, Gaza war - 2008 to 09, Pillar of defense - 2112 ans Operation protective edge - July 2014.
- Israel recycles 90% of their domestic water.  Israel operates 5 desalination plants which supply about 2/3s of their domestic water requirements.
- Jewish population is 70% liberal, who live normal western style lives, 20 to 25% are more conservative orthodox, (wear the kippah on their head) and a small number of ultra orthodox Jews who strictly adhere to the teachings of the old testament.  Trappings include full gowns, head covers and no shaving.  Child births per family are 3, 5 and 10, receptively.
- 30 % of population are under 30, youngest in the world.
- Males must serve 3 years in military, girls 2 years plus everyone must serve one month in the reserves per year until age 45.
- 93% of the land is owned by the government so homes are built on 49 or 99 year leased plots.
- Limestone is used extensively for all types of construction for its insulating properties and abundance.

Our excursion today will take in the Sea of Galilee, Nazareth and the site where John baptized Jesus on the Jordan River. 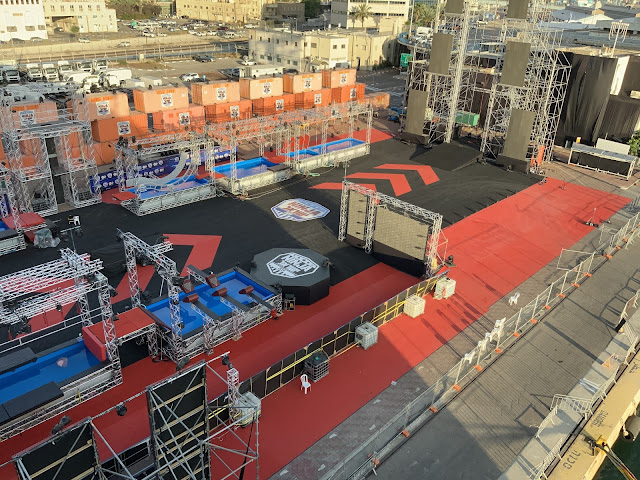 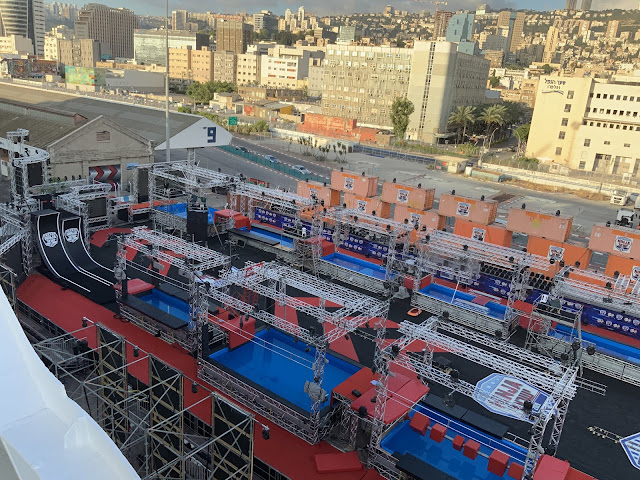 Several pictures taken on our bus ride to the Sea of Galilee.  Israel is a lush, picturesque country, devoid of graffiti. 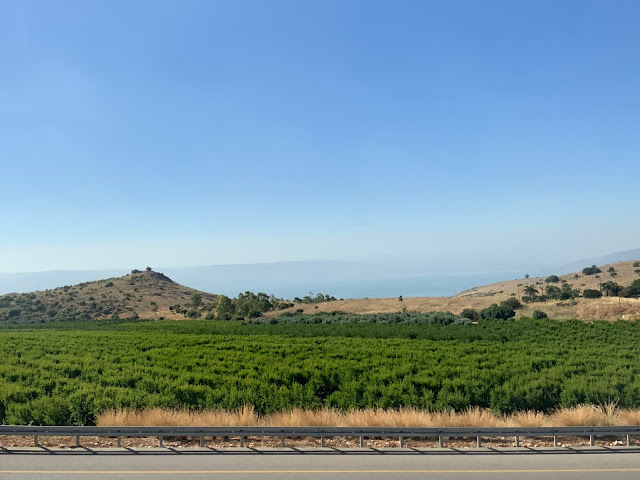 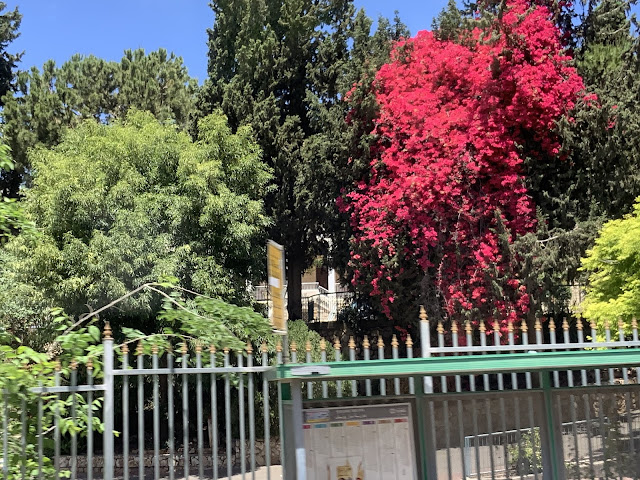 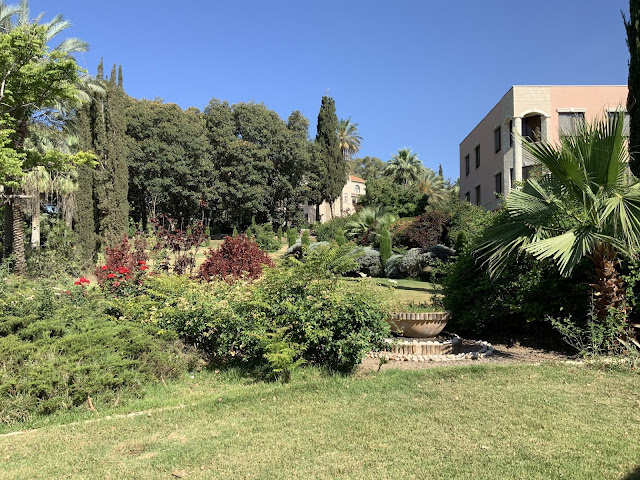 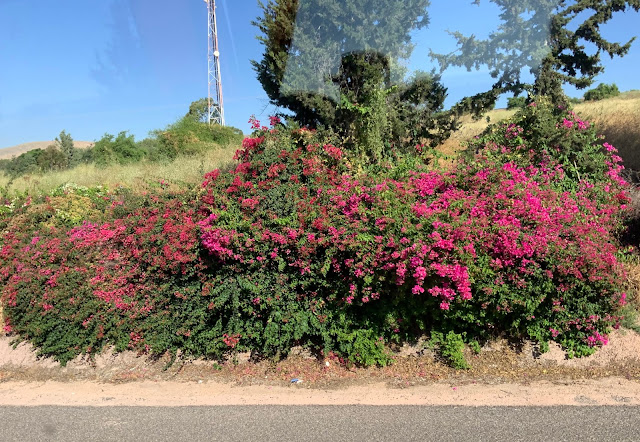 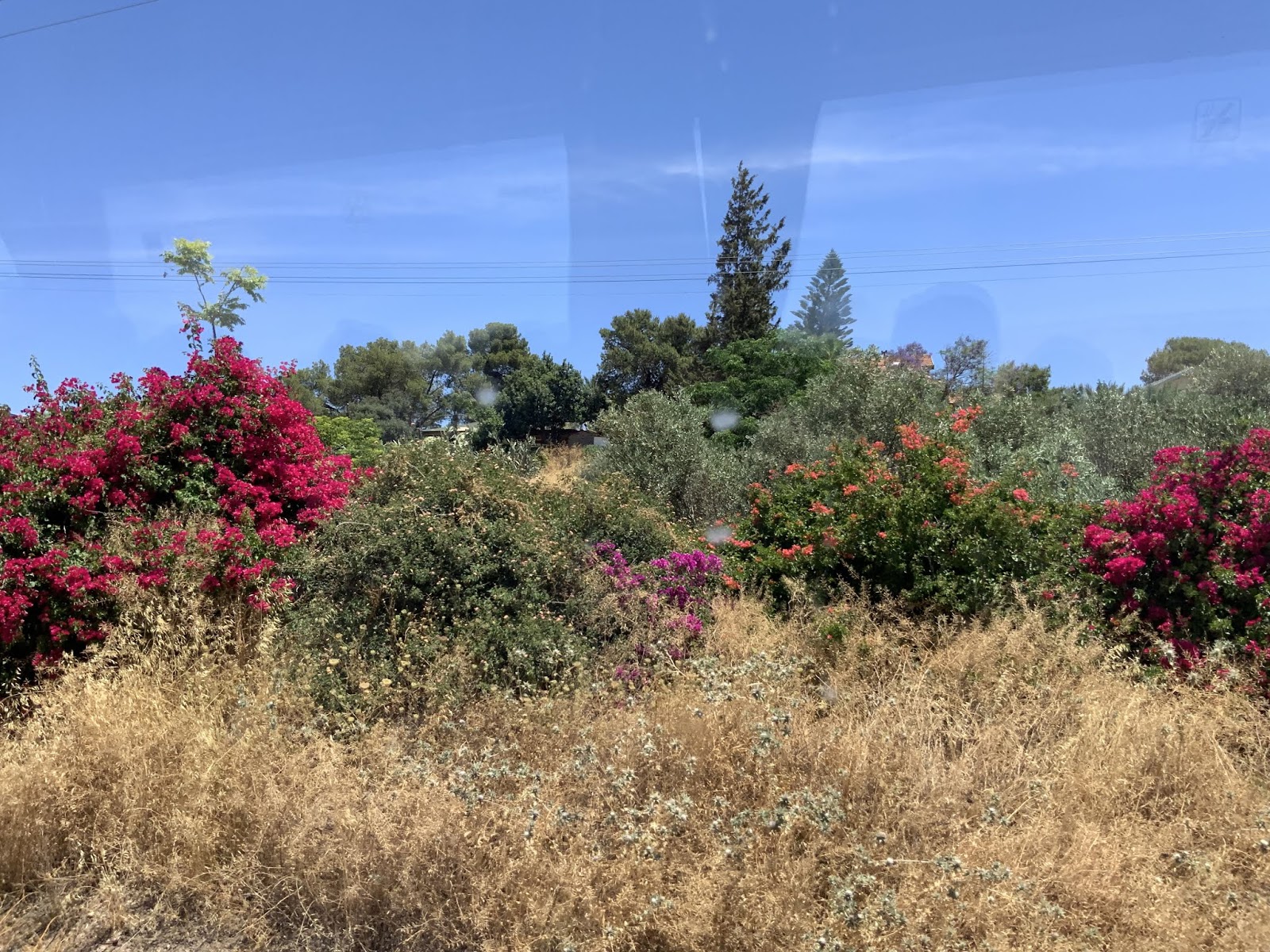 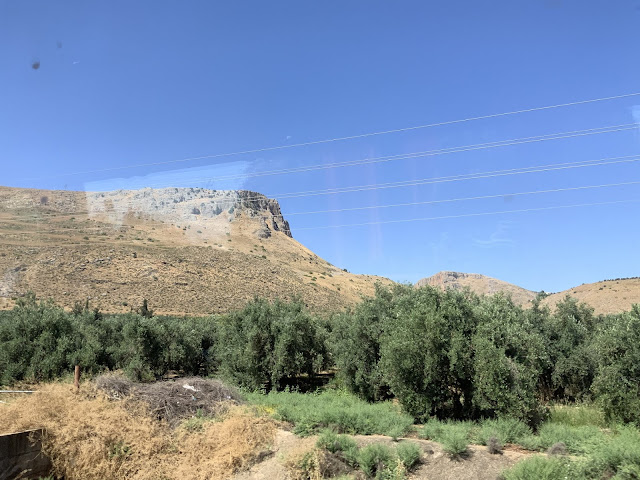 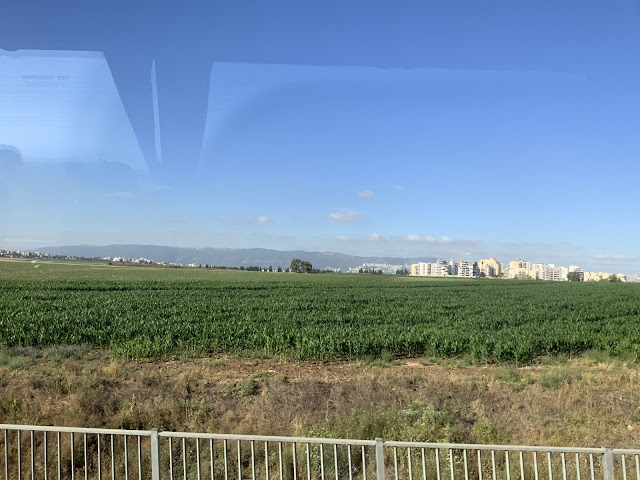 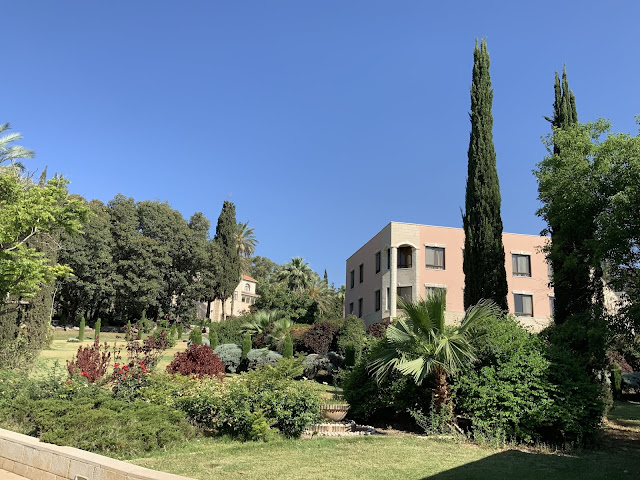 Sea of Galilee, below the Church of the Beatitudes 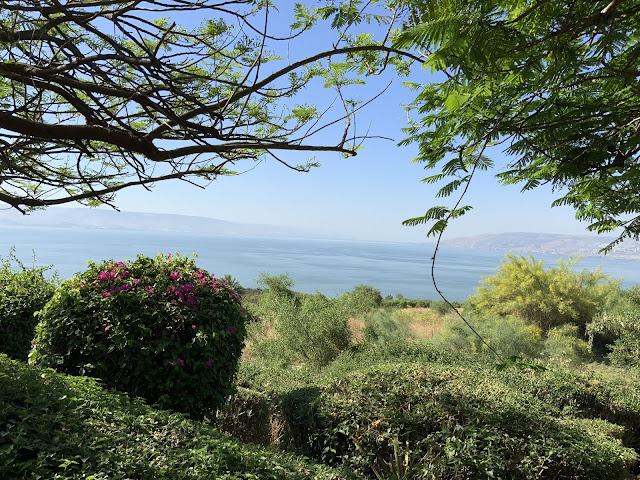 Church of the Beatitudes on Mount Beatitude, overlooking the Sea of Galilee.  Jesus walked up from the Sea to the location of the church, gathered his disciples around to teach them the 8 beatitudes.
In summary, blessed are:  poor in spirit,  those who mourn,   the meek,   those thirsting for righteousness,   the merciful,   pure of heart,   peacemakers and the persecuted. 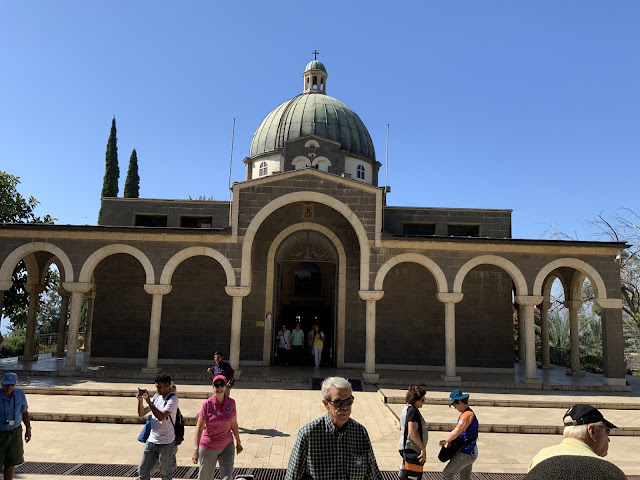 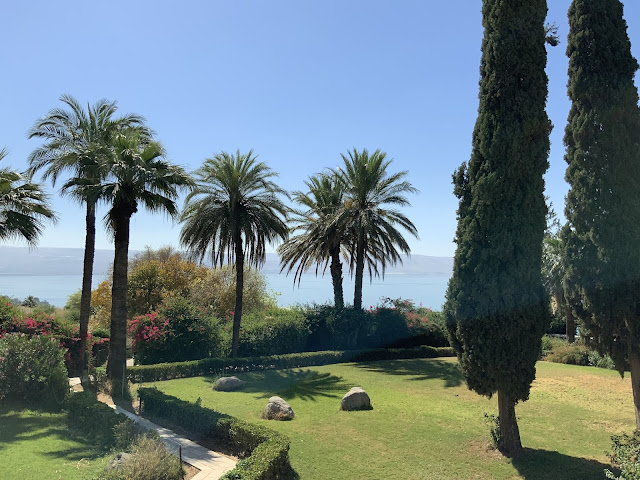 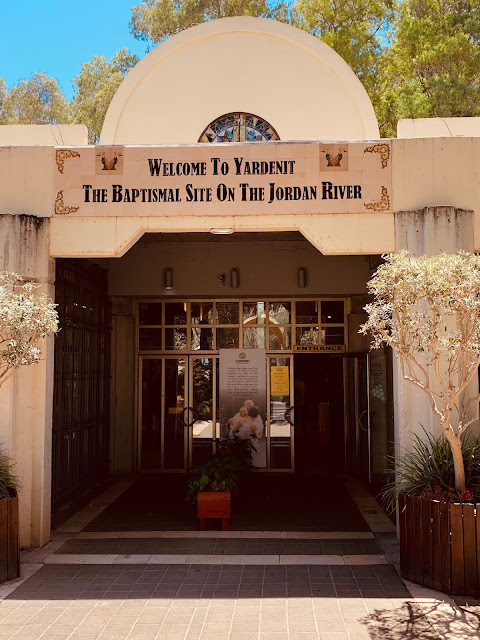 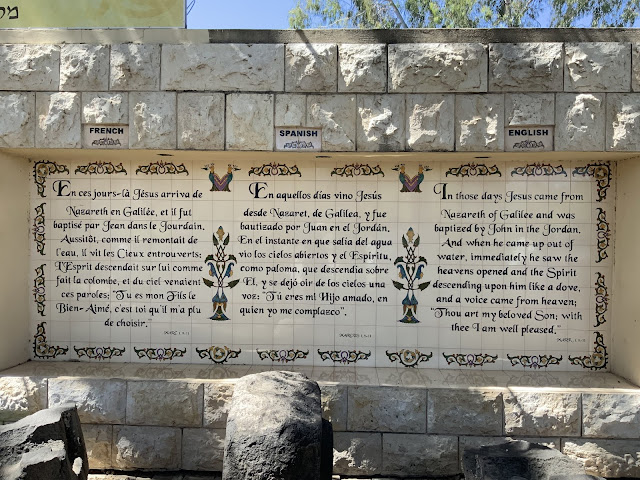 Up to 1000 people can be baptized at one time at this site. 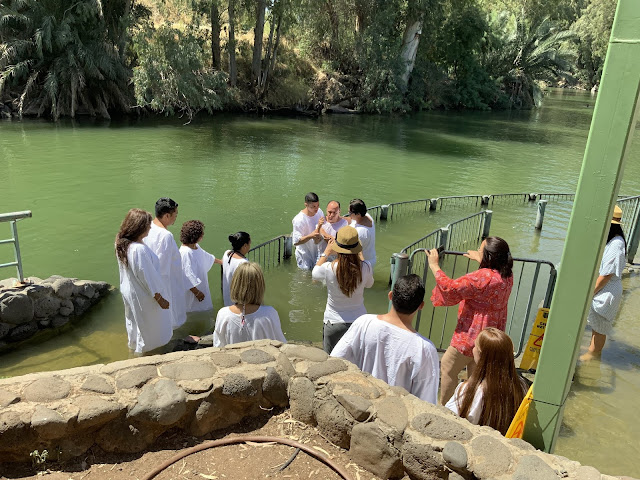 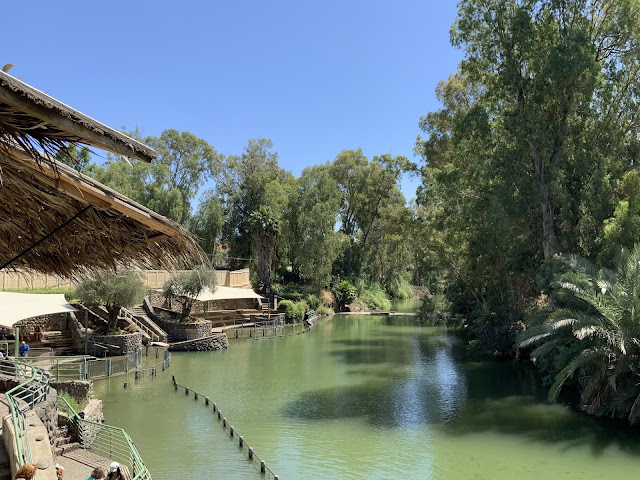 Basilica of the Annunciation. one of Christendom's most revered shrines.  Built on the site where the Arc Angel Gabriel revealed to Mary that she would be the mother of the Messiah 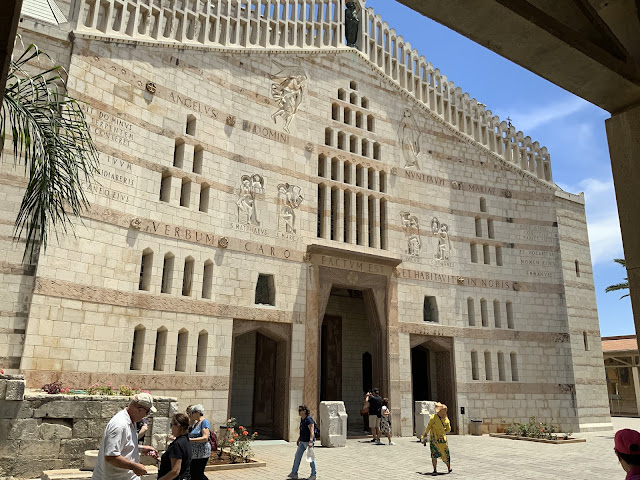 Portion of Grotto where Mary lived, located under the Basilica 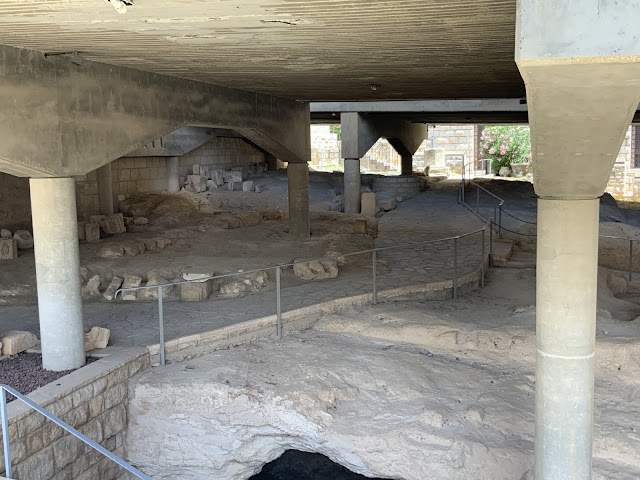 Canadian mural donated to the Church 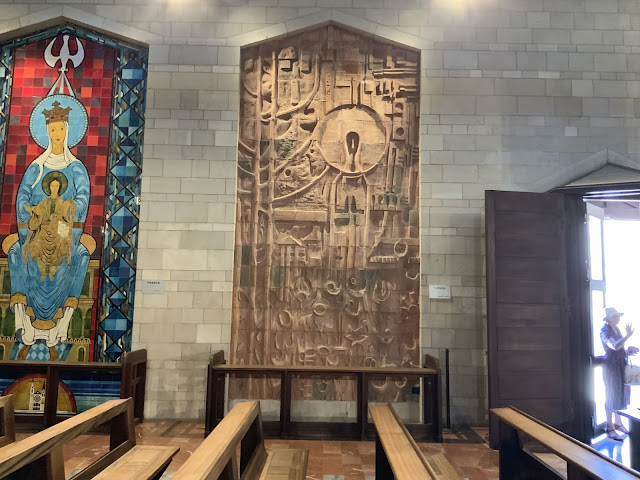 Bahia Gardens, also known as the Hanging Gardens, on Mt. Carmel, downtown Haifa.  Most holy site of the Bahia faith.  Started 200 years ago. 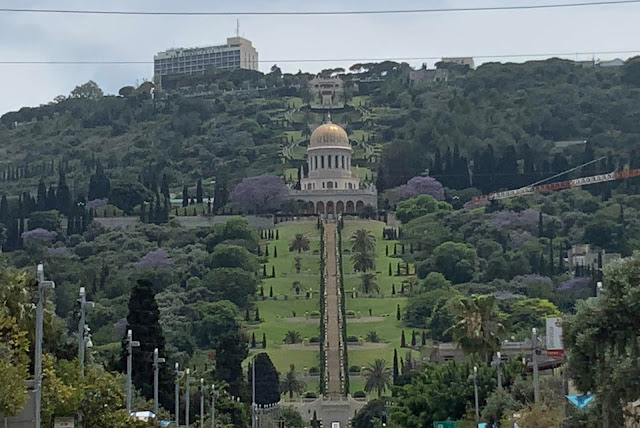