We have reached the half way point of our cruise.  Disappointing, as time is going too quickly.

Our last visit to Hong Kong was in 1989, so expect to see another dramatic transformation.

Britain gained control of Hong Kong in 1841, through duplicitous means, (Part of their drug smuggling history) after the first opium war.   Specifically,
Britain attacked China in 1839, initiating the 'Opium War', to penalize China for destroying illegally imported opium, instead of paying Britain for it. After winning the war, Britain demanded reparations from China which included opening a port to international trade, China paying $16 million in silver for the destroyed opium and the island of Hong Kong was relinquished to Britain for eternity.  About 18 years later, Britain decided they wanted more land and ports, so they initiated another opium war, which they won, of course, and China was now forced to open four more ports, hand over more land (Kowloon) and pay more silver.  This sufficed till 1898, when Britain demanded more land or they would attach again. Wisely the Chinese agreed, but a new 99 year lease was negotiated which culminated in the return of Hong Kong to China in 1997.  A 50 year transitional agreement is in place so who knows what will happen in 2037.

Our cruise into Hong Kong harbour at 11:00 AM, was under cloudy, foggy conditions, but thankfully the temperatures are back into the 70s.  After docking at Hong Kong Ocean Terminal South Berth in Kowloon, (Three blocks from the Peninsula Hotel) Merrilynne and I joined ship mates for a wander around the Kowloon side of the bay, among the milling throngs. An interesting phenomenon was the hundreds of people pulling suit cases.  Well it turns out they were mainland Chinese residents who come here to shop in duty-free Hong Kong.

- 65 million tourists visit here each year, matching NYC
- a Tesla 4 wheel drive sedan costs $250,000, 50% taxes
- Access to Hong Kong from mainland China is managed by a immigration system.
- work week in China is 5 days while 5.5 days in HK.
- only 20% of HK residents own cars
- rents are expensive, eg. a Cartier jewellery store rent is $1milliom US per month
- the Royal Hong Kong Yacht Club is the only institution to retain the Royal preface.
- Hong Kong island has added 15 square miles by filling part of Victoria Harbour.
- Five tunnels connect Kowloon to Honk Kong under Victoria Harbour, with two more under construction.

The exclusive Hong Kong Jockey Club (Private Organization) hosted the 330 around the world travellers tonight, compliments of Oceania.  We were treated to a great feast accompanied by an elaborate cultural play, mock horse races and a high end event in general.  A Sichuan 'face-changing' opera left us all amazed, wondering how the actor changed masks instantly, while his face was fully exposed to everyone.  The Jockey Club's sports betting total for 2018 was $30 billion, US dollars, with taxes of  $1.65 billion, $910 million and $256 million ( US dollars) for horse racing, football
and the lottery respectively.  With $79.6 million income tax on profit, the Club paid $2.9 billion ($US) in taxes, in 2018.
Hong Kong has two horse racing venues, one seats 57,000 and the second 85,000.  One can only guess at how many billions these properties are worth.

Nice to experience how the other side lives!

Cruise in under foggy conditions.  Towering buildings line the port, on both sides, for miles. 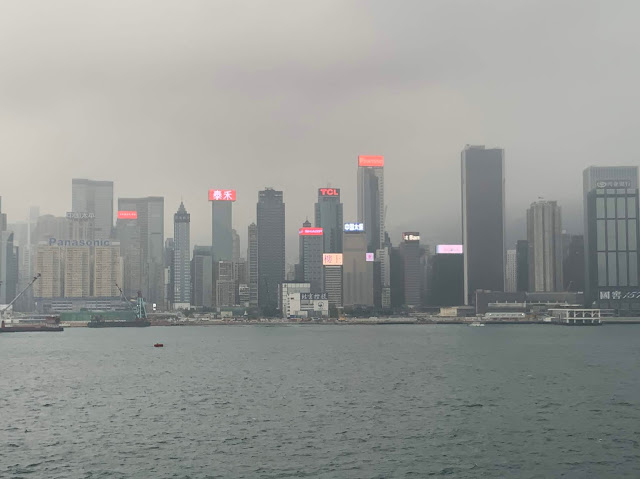 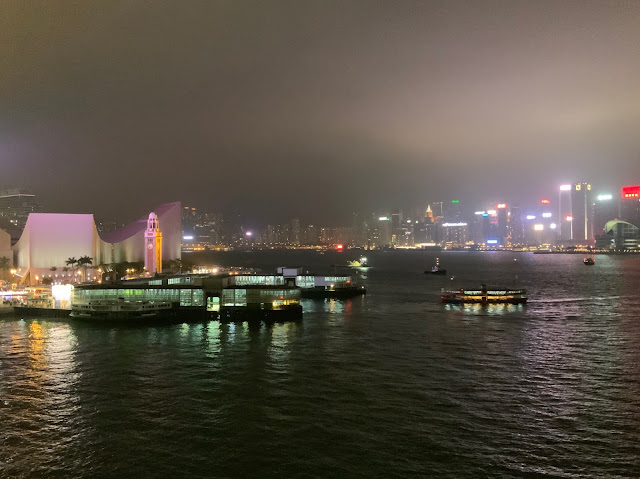 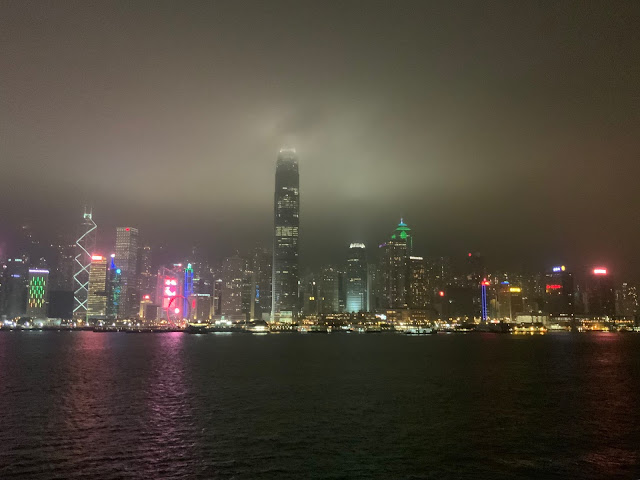 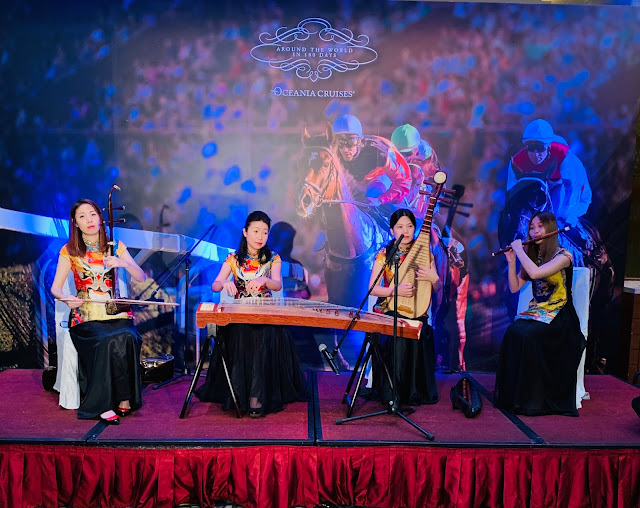 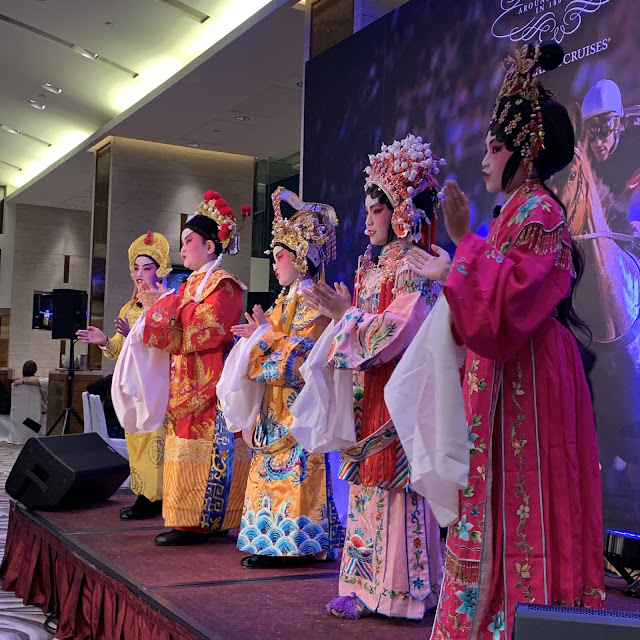 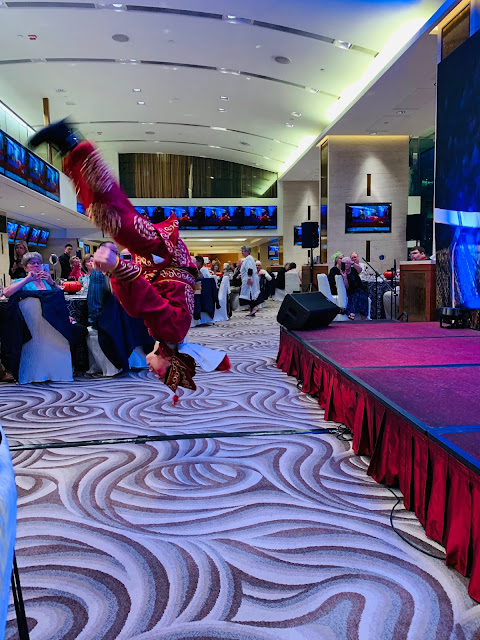 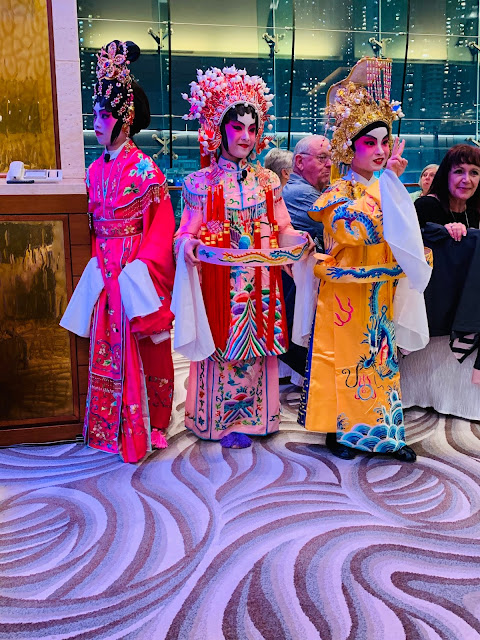 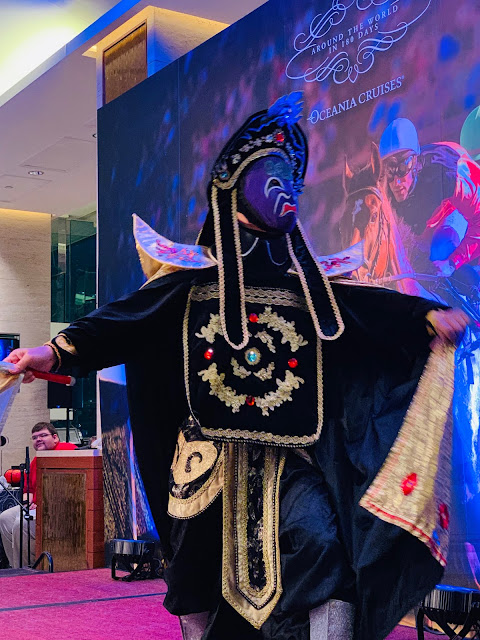 This new mask appeared instantly, right in front of us.  Have no clue how it happens! 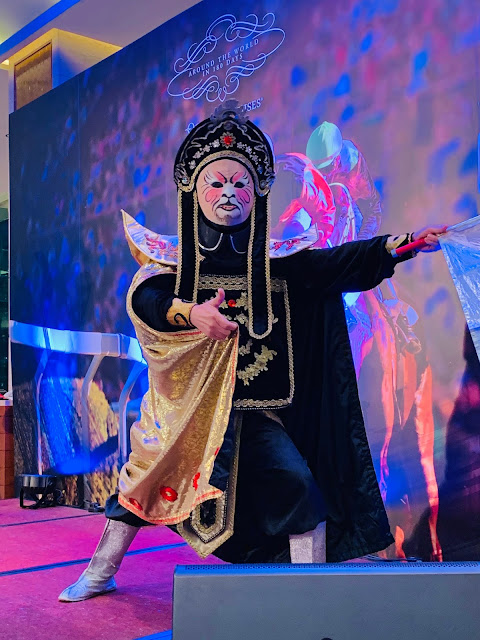 Inside the Jockey Club, showing the banks of TV screens. 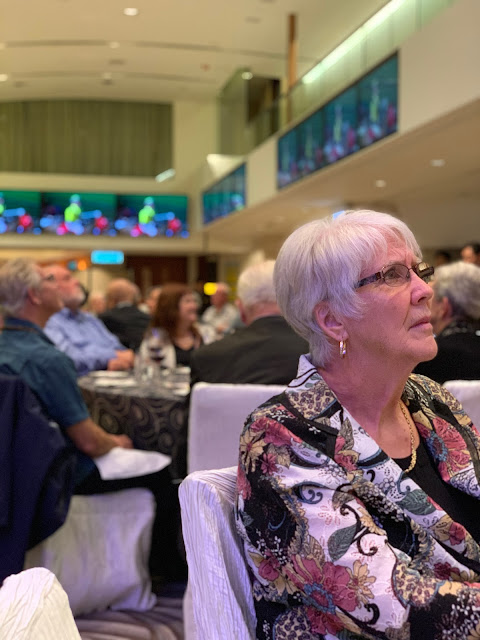 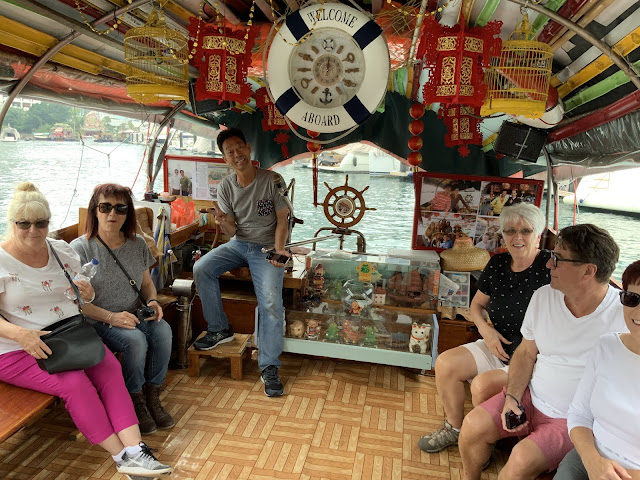 View in the fog from Victoria Peak 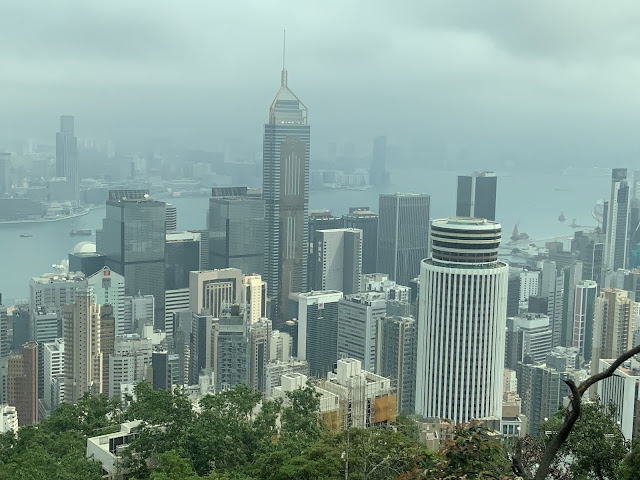 Cruise on a sampan 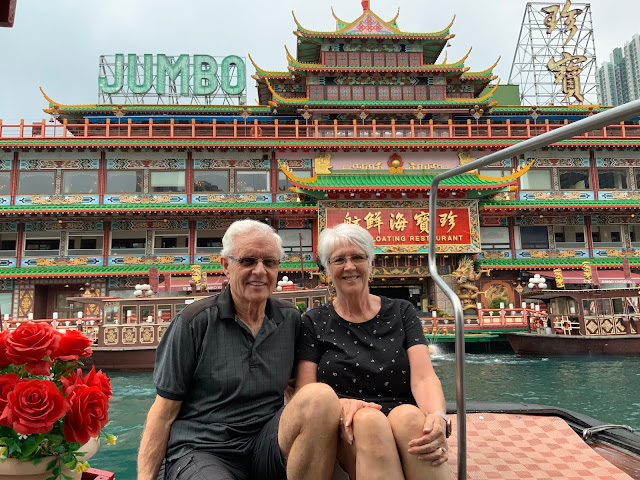 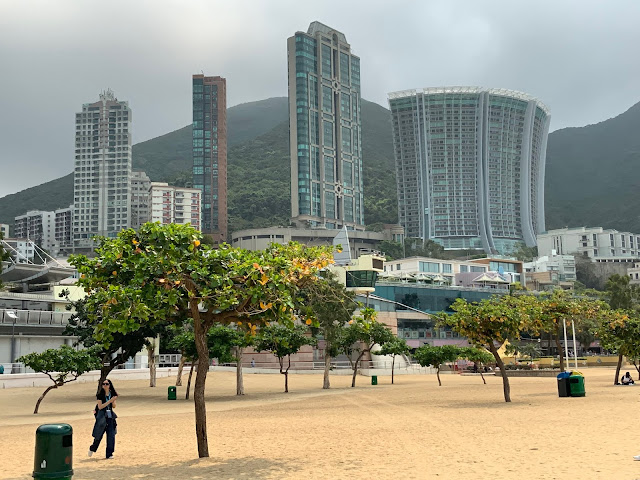